For Maxine: Listening to My Elders

Martin Luther King Day, 2009.  Darcie and I had just learned some pretty exciting news, so we decided to call my Grandma, Maxine Burmeister Cloutier.  Here's how the conversation started: 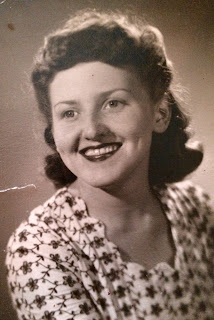 Hi Grandma, how are you today?

Oh, Matt, what a great surprise to hear from you, how are you?

Really good, so, uh, Darcie and I wanted to call and ask you how you feel about becoming a Great-Grandma?

Oh, thanks Matt (I would learn later what she thought I said was, "you're great, Grandma.")   Now, can you believe this?  I never thought, in all my years, I'd live to see this day.

Yeah, we're pretty excited too, it's gonna change everything.

(Wait. What? What is she talking about?  Does she expect us to name our baby Beyoncé?)  You see, my Grandma wasn't really paying attention, too distracted from watching a live event she had on in the background.  While I thought she was referring to her first great grandchild on the way, she was lost in another moment of history, the inauguration of Barack Obama and his first dance with Michelle as the First Lady.

I'm so thankful for that misunderstanding, because Maxine launched into a 5, maybe 10 minute, discussion about how happy she was to witness our country's election of Barack Obama actually moving into the day he was to become President.  She opened up about being afraid that something terrible was going to happen to him between November 2008 and this day, but she'd been praying for his safety.  She talked about the Depression, JFK, MLK, Robert Kennedy.  In all my years, in all my years, she kept saying.  At Last, at last indeed.  She was beside herself with joy, and I can picture that smile of hers, those deep eyes taking it all in, lost in a moment of miracle. 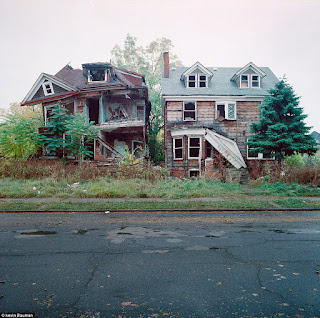 What a gift that was to me, and Darcie was watching me get lost in the miracle of her story, taking it all in.  Because, up until that moment, I had assumed that Maxine was, more or less, just quietly racist.  Years before, at another family member's funeral, we were driving to the cemetery in downtown Detroit.  I happened to be in the same car as my Grandma and some other family members.  As we drove past homes, similar to the ones shown here, someone launched into a diatribe, "will you look at that?  Black people.  Tsk.  You give them beautiful homes, architectural masterpieces, and look at what they do to them?  Such a disgrace...."  The blood in my teenage body started boiling, but I didn't know what to say, and I looked up at my Grandma.  Her response was a tight-lipped nodding, saying nothing, only looking out the window with those deep eyes, taking it all in.  I deduced that she just agreed with the rant, and that was that.

I never brought it up, having sized up my family in one fell swoop, and that day lives on as a moment of definition.  I am not of one mind with these people.  And of course, that was true for some of us in the car, but as in most human stories, the fullness of the truth was far more complex.

I lament the assumption I held for 20 years.  I lament that I never confronted her on that moment, because I may have learned that she and I had more in common than I ever knew.  I lament that, I too, have nodded wordlessly at Generation X/Millennial gatherings when someone says, "you know, sometimes progress means waiting until the racist old guard dies off."  Because that's real, in many ways, but it's also not fair and a bit delusional.  We all know that, sometimes, on death beds, old family members can make us swear to terrible, terrible things.  And then what?  The "old ways" might stay alive, it's how 400 years of systemic oppression keep churning. 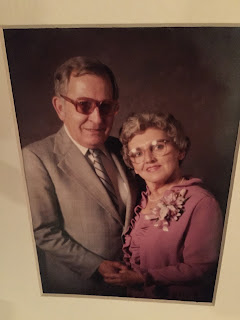 Just waiting for old ways of thinking to die off is not what Jesus did.  He confronted power, turned over tables in the den of thieves, he confronted wrong-thinking and wrong-living, he died knowing that people could change, that deep within, they wanted to change and move back towards God, and God's plan for humanity's best.   I am grateful, too, for the lesson of my grandfather's ending of life.  Maxine's husband, Bill, was an angry alcoholic for most of the time I knew him.  However, once he began his two year decline with liver and lung cancer, he changed.  He started showing up at more of our sports events, started having reconciliatory conversations with family members.  From my 14 year-old perspective, he was a completely new man.  And I'll never forget that either, it fuels some of my hope.

One year ago, on Good Friday, we learned that Maxine, at 91, had developed an acute leukemia.  A few months before that she was still driving, still very lucid, so it hit us pretty hard.  Doctors gave her weeks to months, and a board member with DOOR told me I needed to go see her.

I decided to take Charlotte, my oldest, as we couldn't afford everyone, but with Rapid Rewards and a little privileged help from my mom, she and I could go.  At the time, she was five.  I realized the blessing of having a great-grandmother who could still tell stories, could still recognize us.  So we went.  With my grandmother, a kind of back-and-forth storytelling, we told Charlotte of Barack Obama's inauguration on MLK Day, the day we learned that she was developing in the womb.  We learned that Maxine had a neighbor named Ruby who we never knew about before.  We learned that my grandmother was not angry about her upcoming death.  She knew where she would go.

Her last words to me, as she held my hand sitting in her chair, were this.  Matt, I'm tired, is it wrong for me to sometimes wish that God would just take me tonight?  I'm ready.  I know where I'm going.  But I want you to know: keep doing what you're doing.  You and Darcie are raising those girls well.  Keep going. 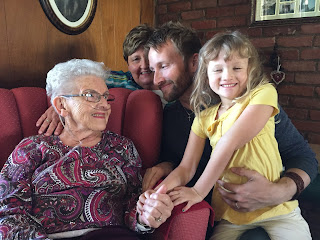 And Charlotte, who tells me that we are orangish-pink, not white, said, Grandma Max, I don't want you to die.  And Max said, well, dear Charlotte, I understand, I don't want to leave you, but I have had a long, good life.  I'm ready to go be with Jesus.  And you will grow up and a be a strong and kind young woman and know that if I can, because I'm not really sure how it all works, but if I can be at important things, I'll be there for you.

I am torn between the two: I desire to depart and be with Christ, which is better by far, but it is more necessary for you that I remain in the body. - Philippians 1:23-24 (NIV).

I am so grateful for Maxine.  She wanted to go, but she sat up to tell us a few more stories, and did this for all of her grandkids.  Grandma Max died on May 13, 2015, exactly one year ago today.

She was human, of course, and had many failings.  An only-child, she didn't know how to teach her nine children how to manage conflict very well, and some of our family fights are pretty downright childish.  I would disagree with her often, and looking back am frustrated anew at the all-too-common remaining silent about conflict from the past (which is what she did in the funeral march twenty years ago).  But, I have to remember that she lived through the Depression.  She watched her own father struggle with remaining strong while he was unemployed, and once they started achieving stability, they never wanted to look back on those hard times.

I was recently at an all-black church, listening to the pastor ponder how the Civil Rights leaders of old failed to adequately transmit the stories to their kids, and he was calling on young people to seek those stories out, and urging the elders to share, share, share before they pass on.  We need a balance of lament and praise to make us whole.

Because it matters, it really matters, the entire book of Psalms lifts this up.  Lament and praise together, not getting lost in depression but also not being lost in delusional celebration, gives us greater depths of understanding and fuel to keep going.  Maxine's stories gave me the hopeful courage, a few weeks ago in Marion, when a white woman in her seventies declared herself to be, proudly, color-blind.  I said, "what I think you mean, is........" and at the end of it, I believe she understood the more important value of working towards Color Bravery.

I miss you Grandma.  Thank you for giving me a complex and hopeful base to build from.  Until we meet again,  @MatthewJSchmitt           +Matthew John Schmitt 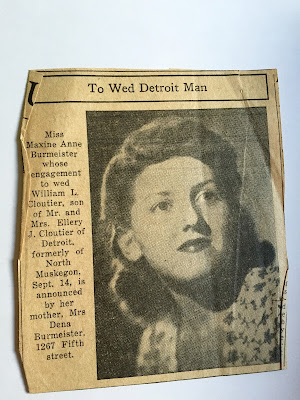 Posted by Matthew John Schmitt at 7:19 AM