On the Road: the Radical Hospitality of Alterna 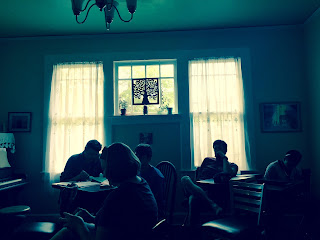 Our stop these last few days has been at Alterna, a bilingual community of Christ-followers devoted to faithful acts of hospitality, mercy, and justice, particularly around immigration and economic issues, in both Georgia and Guatemala.  It was co-founded by my mentor and friend, Anton Flores-Maisonet, and it was true delight to share life with his family, and the families of his community.


In lieu of writing my own impressions and thoughts at this moment (all very positive and hopeful), I'll insert our photos alongside this version of the Lord's Prayer, the Our Father, that Anton and the congregation used as part of our worship service this afternoon (he had also added Spanish translations and more Alterna specific language, not reflected here). It is a lengthy breath of fresh, Spirit-filled air, in the midst of the rancor that fills our feeds and airwaves right now.  Let it nurture and challenge you, and I suggest you read it out loud.  It fills me with hope and encouragement for our launch of The Table Setters.


THE LORD'S PRAYER FROM THE BORDER
by Kristen Bowdre

Our Father who art in heaven

Father of the 11 million undocumented immigrants in the US who currently have no path to legalization.

Father of every guest who comes to our door at Alterna.

Father of the asylum seeking family fleeing the violence in Mexico, the children whose father was killed for refusing to be a drug mule.

Father of the economic migrant from Central America, forced to come to the US to be able to provide for his family due to poverty in his home country.

Father of the small business owner who was being extorted by the drug cartels, who moved his business 5 times and they still found him and physically attacked him.

Father of the 5,100 US citizen children in the foster care system because of our broken immigration system that has detained and deported their parents.

Father of the hundreds of thousands of detained and deported parents of US citizen children, most of whom have committed no criminal offense.

Our father, you sent your son to be born into a refugee family and found no room at the inn. You are being denied welcome over and over again as we are inhospitable to the stranger in our midst.

Father of Jesus, our “buen coyote,” who “crosses us over into the Kingdom against the law, by grace…for if salvation were about obeying the law then all of us are damned."


Hallowed be your name

Hallowed be your name in the women and men who work for justice, advocating for the immigrant and welcoming the sojourner as your scripture commands.

Hallowed be your name in those who go to visit you in the for-profit detention centers all over the US, as private corporations make a profit off of you, you who are not authorized to work in the US but get paid between one and three dollars per day to work behind bars.

Let your kingdom come, your kingdom that abolishes borders, and freely offers grace to all, for none deserve to enter.

Your kingdom that makes no distinction in nationality; your kingdom is kinship and love.

Your kingdom that values all human life as equally sacred; your kingdom is justice and freedom.

For when your kingdom comes, we will see:

An end to drug addiction that creates the demand for drugs in the US at the cost of the lives of so many in Mexico and Central America.

A path to legalization, so that nobody has to live in fear.

Thriving economies in Mexico and Central America, so that people will not be forced to migrate to find survival.

Safety and security instead of impunity in Mexico, and justice and truth brought to the thousands of families who wonder what has happened to their disappeared loved ones.

Thy will be done on earth as it is in Heaven

May your will be done, that none should be afraid because of their race.

Give us this day, our daily bread 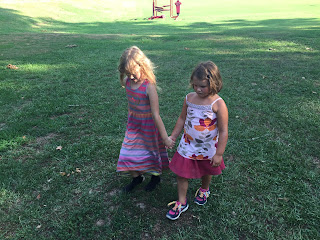 The bread of the freedom to migrate.

The bread of family reunification.

The bread of justice.

The bread of economic opportunity for all, so that people are not forced to migrate.

The bread of abundance, as in your Eucharist, where there is enough for everyone.

And forgive us our trespasses

Forgive us for demanding conformity as a condition for offering welcome; for placing unrealistic expectations on the immigrant to abandon their own language and customs in the name of assimilation, because we fear that they will threaten our way of life.

Forgive us for not seeing the innate value in every immigrant, but placing a priority on those who can serve our country more than others, those with higher education and special skills, and forgetting that every human being has value and something to offer because you love them.

Forgive us for scapegoating the immigrant.

As we forgive those who trespass against us

Lord, we choose to forgive those who have illegally entered our country or who have overstayed their visas, because we know if we were in their shoes, we would do the same thing. We would search for economic opportunity, safety from violence, and a better life for our children in the land where “all men are created equal, that they are endowed by their creator with certain unalienable rights, that among these are life, liberty, and the pursuit of happiness.”

And lead us not into temptation

Let us not be tempted to believe myths about the immigrant, but rather let us build relationships with our immigrant brothers and sisters that lead us to the truth.

But deliver us from evil

Deliver us from the evils of ethnocentrism, racism, and xenophobia.

Deliver us from the evils of scapegoating and blame.

Deliver us from the evil of oppressing others in the name of our own comfort.

For yours is the kingdom,

Which we long to see already.

greater than the power of any government, law, border fence, or drug.

And the glory forever.
Amen.

Driving through Louisiana, Alabama, and Georgia, especially in the Causeway across Lake Ponchartrain, there were spaces to "Cross Over", or make a U-Turn, or what some friends call a Rainbow turn. Today, on a tour with Anton Flores-Maisonet of @antonofalterna Alterna we learned of the two tales of LaGrange, GA, a city with some of the greatest discrepancy if wealth in our nation. After driving through the Southwest, we drove to the Northwest and came across the Chapel in the Pines, a beautiful neighborhood chapel with its very own Steinway Piano. Unlocked, available for anyone to use at any time. Anton asks what does this say about our faith? Do we, who have an abundance of wealth, hide it away in a private and beautiful enclave, meant for individual use, or do we open our doors and gates to learn and stretch our understanding of God through one another? Do we learn about faith from another's context? What does this say about the war between #BlackLivesMatter and #AllLivesMatter? Could we turn around and look at the other? Could we cross over to their side of town? Prayerfull, I entitle this improv: Cross Over. #DismantlingWhiteousness #TheTableSetters #Mathyudjan
A video posted by mathyu djan (@mathyudjan) on Jul 24, 2016 at 10:40am PDT