How Tori Amos Primed Me for Dismantling Whiteousness, and that Native American Lives Matter

Anyone who knows me also knows that I learned how to play piano, how to really play from my soul, by studying the catalog of Tori Amos.  And Tori has often shared that, at least in terms of her left-hand, she studied the catalog of Stevie Wonder.  Unfortunately, my left-hand has never quite achieved the Wonder-filled status of hers, but I'm content that my cloud of musical mentors involves the two of them, amongst many others.

Like the true Toriphile geek-nerd that I am, I came across a photo of her original demo tape, and the address that is visible in the photo is presumably her first Hollywood apartment.  It's literally around the corner from the First Presbyterian Church of Hollywood, where I work and serve as the piano player on a huge concert grand Steinway most Sundays at 11am.  I'm often asked to play a piano reflection before or after the sermon, and more than once, I've channeled a lick from an Amos original.  Seriously people, that little apartment is the equivalent of Graceland to an Elvis fan.  To think, 30 years later, those pieces would be musically engaging Christians during moments of prayer just a block from where they were born.

Tori Amos is well known for her stark and strong vulnerability; for the way her hauntingly a cappella song Me and a Gun literally launched a revolution (see RAINN) in dismantling the blaming demonization of female rape victims, even though the radio stations had no idea what to do with it as her first single.  She has nodded to the mothers of modern musical feminism like Joni Mitchell and Kate Bush and has carved out even more space for Alanis Morissette, Fiona Apple, Regina Spektor and male artists like myself.  She has fearlessly called out the hypocrisies of the Church and our government, but always in a way that is exceedingly fair.  Whenever she goes after the evil in another, her albums offer ample moments of holding the mirror on herself.   Think, "I can't believe you're leaving 'cause me and Charles Manson like the same ice cream."  It's a tragically wicked sense of humor she employs, but it always comes around to make a point about, well, justice.  We are all capable of good and evil.  If you're going to criticize the speck of dust in your neighbor's eye, first check out the plank in your own.  Tori Amos sings about Jesus, both directly and through inference, more than many of the top Christian artists.

I was 16 when I first started spinning Little Earthquakes and Under the Pink in my suburban bedroom.  When the song "God," came on, the Catholic in me cringed and felt like I ought to skip from Pretty Good Year right onto Past the Mission (I hadn't learned to appreciate Bells For Her yet).  But then I learned, because the internet-as-encyclopedia was coming of age along with me, that God isn't really about our Creator, but rather about all the so-called Christian leaders who like to play god, who like power and who love to be worshipped, driving around with their "nine-irons, just in case."  If you have trouble picturing this, maybe this will help

But what Rolling Stone and Spin and MTV News never seemed to pay much mind to was how much Tori Amos takes on the issue of racial injustice.  And furthermore, in line with the mission of this blog, Tori Amos has always been Dismantling Whiteousness since she regrouped after Y Kant Tori Read.  From the indigenous chorale chants on Little Earthquakes of "give me life, give me pain, give me myself again," to her unique "Cherokee Edition" of Home on the Range where she bitterly asks, "America, who discovered your ass?"  Tori's critique of America's Original Sin has been constant and significant.

Most fans know this well: Tori's father is a Methodist Pastor with staunch Scottish ancestry while her mother brings two Eastern Cherokee bloodlines together.  This naturally created quite a juxtaposition in her upbringing.  One set of grandparents fiercely expected her to assume a subordinate role, as was the common Christian attitude towards women in the 60s and 70s (and, unfortunately for many, is still the case today.)  Her other grandparents taught through stories of ancestors, especially her "Poppa," values like strength, courage, respect for the land and respect for finding her own voice.  Myra Ellen Amos, her birth name, was uniquely positioned, and uniquely gifted, to stand in the crossroads and pay attention.  I am so very grateful that she started writing her observations into lyrics and songs that never leave me.

So let's dive into her battle with the status quo's mission to silence and subdue, that overly proud Whiteousness which she often, and rightfully, attaches to American Christian-ism (the warping of a true walk behind Jesus):

Her sixth studio album, Scarlet's Walk, may be the best representation of this mixed upbringing alongside observations of the United States freshly after the attacks on 9/11.  It has been championed by Native American activism groups since its release.  Part of the creation of the album involved a road-map (included in the liner notes), with each of the 18 songs corresponding to a different region of the country.  Tori studied the musical traditions of the land's original people, and together with Matt Chamberlain as her percussionist, a man with Native American heritage himself, they built rhythm sections for each song that paid homage to the indigenous styles of the region.  It's a metaphor of her entire career, building songs out of the forgotten stories, the severed narratives, and the folks who've been conquered and silenced by dominating power structures and people.  Right there in the actual beats, the subtle but undeniable pulse of her ancestors. 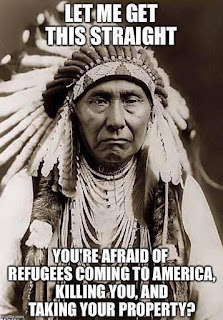 From the title track:

a guest up until
you announced
you had moved in
"what do you plan to do with all your freedom?"
the new sheriff said,
quite proud of his badge
"you must admit the land is now in good hands"
yes, time will tell that
you just lift your lamp
I will follow her on her path
Scarlet's Walk through the violets...

so hundreds of years go by
(the red road carved up by sharp knife)
she's a girl out working her trade
and she loses a little each day
to ghetto pimps and presidents
who try and arouse her turquoise serpents
she can't recall what they represent
and when you ask, she won't know

Virginia, the personified woman of native origin who can't remember her name, the tragedy of assimilation wiping out culture.  She is a commodity, she is interesting and used for someone else's profit, but she can't even remember why she matters.  It's chillingly tragic, but look at the way dominant culture loves "ethnic" music until someone like Beyonce reminds us she's actually African-American (see earlier post.)  And Scarlet is the woman who does remember, who lights the way for Tori, and for any of us who will listen.  This new authority, the sheriff, was a guest until he stole the land.  But Tori reminds us that the stories are still alive, even if we have to dig to find them, and sitting around the fire on level ground will always, always matter.

--Listen for two minutes to Tori explain the power of a sole native activist who came to her after a show, literally inspiring the journey of the Scarlet's Walk project.  The woman came with tears, a tomahawk, and compassion.  It's a breathtaking lesson on greed being confronted with the hope of actual reconciliation.

Earlier on the record in Sweet Sangria (right), she links the struggles of the natives to our modern day neighbors crossing our southern borders.  Today, I was on a hike in the Hollywood Hills, contemplating how this land was originally Mexico.....


before sundown the mexicans leave san antone
the car will then drop him at the border
the breaking point
i know your people have suffered
time and time again
but what about i ask you now
the innocents on both sides
give me a bloodless road
tell me why does someone have to lose?

Tori Amos lifts the secrets, the untold stories, the ugly alternative American history into the limelight.  She's been dismantling the dominant narratives for years, especially the ones that hurt everyone but White Anglo-Saxon Protestant Men.  She's been encouraging all who've been silenced to speak up, to gather around and share.   I found myself wondering about Cornflake Girl again, even though she describes it as a song pondering the way women betray one another, could her "hangin' with the Raisin Girls" instead of the dry and stale Cornflakes be a poke at Whiteousness that does not value diversity?

And Happy Anniversary Tori Amos and Mark Hawley! (I realized that it was today as I researched elements for this blog).  You are my favorite musical power couple....and thank you for your commitment to unearthing that which has been shamefully hidden.  I hope to carry that torch in this blog.

I'll close the blog with a collection of Amos' lyrics that continue to dismantle the story of white supremacy and what people of color have had to put up with in order to survive in this country:

Mama got shit, she loved a brown man, so she built a bridge in the Sheriff's bed.
She'd do anything to save her man.


Jamaica, do you know what I have done?  Mary M weaving on
said what you want is in the blood, Senators.

We laughed in the faces of kings, never afraid to burn.

Our father of Corporate Greed, you absolve Corporate Thieves.


You know that I'm drowning, put on your raincoat again
cause even the sun's got a price on it.

You don't need a spaceship, they don't know you've already lived
on the other side of the galaxy.


The Indian is told the cowboy is his friend.

Hey, there's a new Jerusalem! Hey, you built on rock that's on sand!  For now you have hijacked the Son, last time I checked he came to the light the lamp for everyone!


Plant another seed of hate in a trusting virgin gun.


Because we all lay down to sleep through the Now.
And if we all lay down,
She'll be waiting for us where the rivers cross
Once we wake from our rest.
"All the best," the Other America

Will we wake from our rest?  Will we wake up and listen to these voices?  I pray we do, soon.  There's so much us Anglos have to learn and unlearn and relearn.

-Peace, love, and rock and roll,
Matthew, follow the dialogue on Twitter here
Posted by Matthew John Schmitt at 5:53 PM