On the way to church last Sunday, my oldest daughter, 6, asked me, "Daddy, what's the number to call the police?"

"That's 911, and it calls for help, which could be for firefighters, paramedics, or the cops."

"Do they come right away when you call them?"

Well now: I explained to her that when we called 911 when I had a health scare* last year, the paramedics came within a few minutes.  My wife called from the zip code 91403.  And I asked her if she remembered the situation a month later at La Casa de la Comunidad at 5846 Gregory Ave., 90038.  She did, and she remembered how long it took for help to come.

5846 Gregory is located in a predominantly Latino immigrant neighborhood.  It's where the Dwellers of DOOR Hollywood live, and where multiple times a week they engage in communal living with their neighbors, mostly youth.  Sometimes homework is done, sometimes stories are shared, sometimes games are played, sometimes meals are had.  On this particular night, my daughters and I were spending time with everyone, when one of our Dwellers, Sara, comes bounding on the front porch with a mother from the community.

"Help, everyone!  Her daughter is missing, and she's worried she might be in terrible danger.  She called the police but that was about a half-hour ago."

The Dwellers and I moved out to the sidewalk, as a Dwell alumni was there to help watch the children hanging out at the house, my daughters included.

The mother was, obviously, very distressed.  I spoke with her, and learned that, yes, she had indeed called the cops but she did not have much hope they would show.  About an hour earlier, her teenage daughter had left a message that someone was trying to hurt her, and she might just hurt herself instead.

We asked her family to give us a photo, sent it amongst our cell phones, texted everyone we knew in the neighborhood.  We organized in pairs and, with the family and other neighbors, started going up and down the block.

And suddenly, a moment of the Holy Spirit: I remembered something a local Anglo fireman friend had told a group of us at DOOR a few years earlier.  Too often on the dispatch, he was always sickened to hear the unofficial codes that were used to identify situations in lower-income areas.  In particular, he told us of one from the 90038 neighborhood: the "Hysterical Latino Woman."  If a call came through from a Hysterical Latino Woman, he told us, the "protocol" was always delay, to "let her calm down some."  Sometimes that meant they would literally just sit there, not moving at all.  Sometimes, they would drive the long way around.  The very long way around.

So, we tried something, as we felt that we could really use some professional help here.  Molly, another Dweller, herself also Anglo, and I decided to each call 911 from our cell phones.  We reported the same thing using our actual names.

Go ahead, tell me it was circumstantial.  Go ahead, tell me that there's no way to prove any systemic or personal racism was occurring.  And you would probably be right: there is no way for me to prove it.  But: when you're standing right next to people in their real pain and walking alongside them in their heart-pounding panic, you know because they know and altogether, the truth is clear.

My wife and I spent the first few years of our marriage living in a Mexican part of Koreatown.  Cyndy, Kevin, Nicole, Rafael, Kiara and their parents told us that calling 911 was never the first thing that came to their minds.  It was too frustrating and could actually be dangerous.  If someone needed medical attention, you went and knocked on a neighbor's door to borrow their car and you got to the hospital as quick as you could.

Which is what the mother of this story had done.   Thankfully, her daughter was found within the hour, and she was alive and unharmed.  The community and the police collaboratively sought and succeeded.  As I believe it should be.  Why did it require our white voices to spur that into action?

And, unprompted, my daughter asked me on our ride to church this full year later: why didn't the police help sooner?  And, like always with questions of justice, we have committed to telling our kids the truth.

It's the ugliest truth about humanity I know.  It's the crime of Whiteousness.

We know many mothers in the 90038 zip code near La Casa and many mothers know us.  I dare you to tell me that Emma's life is less valuable than Darcie's, the mother of my children.  Emma who sells tamales to neighbors to raise her three children and has cooked thousands of meals for DOOR Hollywood Discover groups.   Emma, who immediately after her best friend Cecilia was killed in a horrible car accident at 5:30 one morning on her way to work by a drunk driver on their way home from a club, took on caring for four additional children, especially while Cecilia's husband healed from his broken ribs.  I dare you tell me that Cecilia's life didn't matter enough to merit a response whenever she may have called out for help, while she was raising four amazing children.

Or Yolanda.  Or Lydia.  Or Rosy.  Or Sylvia.  Or Becky.  Or Gladys.  Or Mercedes.  Or....... I dare you.  If you tell me something about tax dollars and property values and response times and safety for the officers, I may hear you, but I won't be listening.    Especially if you are talking from the point of view of someone several steps removed.  Or several zip codes away.

Hold someone else as they shake with fear and anger, listen to them tell you why they don't trust law enforcement or emergency services.  I definitely respect the idea that officers must worry about the safety of themselves and their teams.  But intentional delay?  Logic would have it that the longer you wait to provide help, the more escalated the individual would become.  So don't tell me that "waiting for her to cool down" is about safety.  It's about a stratified value of human life.  It's about racism.  And we must expose it, lament it, confess it, and repent it.  God help us.

Check out another brief take on Zip Code inequality by Marvin Wadlow Jr.  above.


* I had accidentally ingested a dessert made with pot, and it launched a full-on panic attack that felt like dying, all in all a hilarious, White-privilege-laced story for another time. 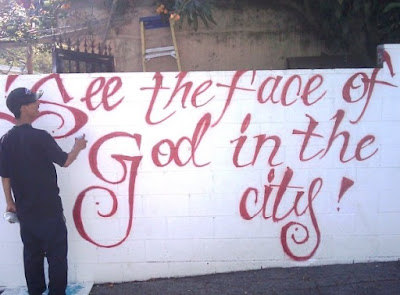