Voices from the Movement of Teach For America 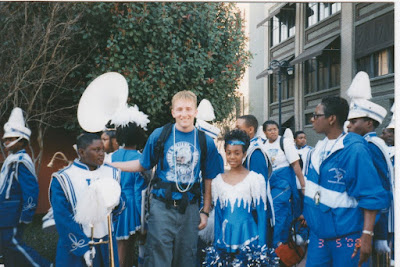 For today's post, I will share some of the most powerful moments from Teach For America's 25th Anniversary Summit, 7 days ago in Washington DC.  I've always been thankful for the work, for the access it gave me to be truly a part of the New Orleans East community and learn Southern Black and Vietnamese cultures while teaching at Fannie C. Williams Middle School (it's different now post-Katrina), and for the unwavering belief that all kids are created with equal capacity to learn and excel.

But last weekend, I felt like I was part of a real moment in history.  I've always wished I could have been alive during the march on Selma.  This event made me glad I'm alive today.  This is a fight for humanity, to defeat the insidious effects of whiteousness, and get on with the true work of becoming the Beloved Community.

I highly recommend taking an hour and watching all of them, but I'll give some descriptions if you only have time to pick a few:


Julio Garcia (Rio Grande Valley, 2013) shares how his middle and high school Teach For America teachers influenced him to not only attend college but also return to his hometown to teach too.  He's now a second-generation TFA corps member teaching middle school history at Ramiro Barrera Middle School in Roma, TX

My favorite moment of the event: Memphis Lift, a small and mighty group of parents and grandparents who are organizing to improve schools for their children.


College freshman Dawnya Johnson tells her testimony of struggling in school while living in the foster care system.  Now she speaks to battling systemic injustice in front of audiences like the Department of Education, the President, international gatherings, and this room of 15,000.

I am proud to have played a small role in this video on the critical importance of engaged, deep, diversity, led by Dr. Irma McLaurin, Chief Diversity Officer of TFA.

The weekend caused me to miss attending a worship service.  However, Mike Johnston (Mississippi Delta, 1997), Colorado State Senator, "preaches" on the modern day Civil Rights movement.  It was church to me.

And, this was the coming-out party for Teach For America's newest CEO, Elisa Villanueva Beard, also known as EVB.  She and I were both corps members in 1999, and she is on fire for academic and social justice, and believes TFA will always be part of the ongoing fight for equity.

Posted by Matthew John Schmitt at 11:07 AM

Email ThisBlogThis!Share to TwitterShare to FacebookShare to Pinterest
Labels: Teach For America