The Tragedy of Whiteousness for White People

"We need to generate greater cultural awareness of the way white-supremacist thinking operates in our daily lives.  We need to hear from the individuals who know, because they have lived anti-racist lives, what everyone can do to decolonize their minds, to maintain awareness, change behavior, and create beloved community." -bell hooks, Teaching Community: A Pedagogy of Hope

For 20 years now as an adult, but probably even longer, I have been being formed by attempting to live the anti-racist life that bell hooks mentions, in thought, word, and deed.  My testimony of following Jesus attests to the clear reality that friendships with children of God who look different than me, who sometimes even understand God differently than me, has literally saved my life, time and time again.  Salvation for me looks like the Beloved Community, trusting that God designed it this way and living into it as best as I can, now and forevermore.

And I don't think I'm being myopic here, focused on one "issue" of being a Christian.  (That issue being race-relations and the embedded injustices when those relations do not start from level ground.)  I believe this is the issue when it comes to how we relate to the family of God's children here on Earth: loving our neighbors as ourselves.  The Rev. Dr. Shanta Premawardhana shared his perspective at a DOOR National Meeting once, and it has blessed me all these years.  He reminded us that the story of God and humanity starts in a garden, but it ends, or I should say, moves towards and continues eternally, in a beautiful and diverse city:


The nations will walk in its light and earth's kings bring in their splendor.  Its gates will never be shut by day, and there won't be any night.  They'll bring the glory and honor of the nations into the City." Revelation 21:24-26, The Message

But before we get to a glimpse of that party, let me confess to you: Native, Black, Latino and Vietnamese people have literally redirected my life in ways that I strongly believe, saved me.  I believe God intervened through them, and it helped me to understand the beauty, truth, and hope of Revelation.  Now, I am learning to listen to a broader range of my Asian and Pacific Islander brothers and sisters, too.  I'm here, because I've been loved by a beloved community of Native, Black, "woken-up" Anglos, Latino, and Vietnamese people.

Whiteousness.  It hurts and kills white people too.  It is a tragedy that needs to be dismantled.

I grew up in Beverly Hills, Michigan, a few miles north of Detroit.  The genius developers over at the Cooper Center have created The Racial Dot Map (left).  Green dots represent Black people, blue represents White.  Notice the stark line between green and blue in Detroit: that's 8 mile Road.  Now, Beverly Hills is right at the tip-top edge of areas that Black folks live, but north of my hometown, you see it is blue.  And then it stays blue.  I grew up around mostly white neighbors, many of whom said, "the minute a black family moves into this neighborhood, we are moving out."  And they did.  Thankfully, my parents did not subscribe to such notions, and even did the unthinkable by taking their children into downtown Detroit for more than just Tiger's games.  We went to concerts, art shows, festivals from time to time, my favorite restaurant being the Mexican family-owned Xochimilco's.  This was my first saving grace, my parent's decision to not be as afraid as their neighbors were with crossing 8 mile.

Let's fly over the great plains to Denver, more specifically, Littleton, Colorado, where I spent many summers because of family who relocated there in the late eighties.  I remember when it was being developed: it was, and still is, this beautiful foothill-surrounded enclave with white-picket fenced homes.  The cutest prairie dogs dot the undeveloped landscape, and as they were my favorite zoo animals, I just thought that was awesome.   It was the imagery of the American Dream, and I myself dreamed of moving there.  Until April 20, 1999.

Most Anglos remember where we were that fateful day.  My cousins were thankfully still too young to be in high school, but their neighbors were not so lucky.  How this could happen in this perfect little community, I remember the headlines gasping, was beyond comprehension.  Unless, little "safe" enclaves are actually more problematic than perfect.

Littleton, Colorado is, as of the 2010 census, 94.1% White, as is much of suburban Denver.  A few years back, Toni White and I were flown to speak at a church there on the topics of compassion and reconciliation.  It was a wonderful conference, and our hosts were lovely.  After one session, Toni and I recognized that some people needed one-on-one time to process further, so we set up shop in a small classroom.  Within ten minutes, a church staffer came in to say that we had to find somewhere else because the regular Friday night teen suicide prevention ministry would need the room shortly.

The regular teen suicide prevention ministry.  Grateful that they are taking that so seriously, but it struck me as utterly tragic.  The need must be so strong that a weekly ministry has been established.  This, in the image of the American Dream.  This, 15 years after the massacre that shook White America to our cores.  What is going wrong?

Diversity matters.  Not just as a politically correct, pie-in-the-sky, liberal, bleeding heart thing.  But as a Biblically correct, New Jerusalem-minded, God-honoring, blood of Christ thing.  Authentic diversity has given me my first taste of God's saving power being remembered through His people.

You've heard a bit about Levi.  (See Post 1 and Post 2).  Forever, when I read the book of Philemon, I see Levi as Paul, asking me, as Onesimus, to carry the Gospel from that Detroit-area prison.  The good news is that God loves all people, even someone convicted of murder and even someone who was still grasping for a sense of conviction in his life.  I consider myself a servant of Levi, and it shapes me and my understanding of Jesus.

Levi told me to be a teacher, which led to joining Teach For America, and that took me to New Orleans East in the Upper 9th Ward.  I am a person who struggles with anxiety and depression, most especially when I experience failure.  Any first year teacher will tell you that failure either becomes their best platform to grow or the dominant reason they quit before year two.  A community of mostly black teachers surrounded me and encouraged me, and when they felt me strengthening, started to rib and tease me.  I didn't know how to really laugh until my friends in New Orleans taught me how to not take myself so seriously.  And being invited to homes of my students, being fed gumbo and homemade beignets, being teased by my Vietnamese students at my pronunciation of the word Phở... I can guarantee that this was the beginning of my recovery from Whiteousness.

When Marvin Wadlow Jr. and I were developing the racial reconciliation curriculum for DOOR Hollywood, we had some hot moments.   There's the infamous time we were on the phone together, me walking to the bus, he standing on his porch half-dressed, cussing each other out.   I even stepped into an alley to not disturb the folks on the sidewalk and wound up accidentally waking up a man living homelessly.  "Hey buddy, people are trying to sleep over here!"

But Marvin and I committed to staying at the table together through that fight, and much fruit has come from that.  One of the many things I've learned from him is that we need to honor the gifts of our cultures.  European-descended folks, in general, tend to be planners and convinced that they can solve any issue if they have enough preparation.  African-descended folks, in general (and maybe this is because of forced acculturation here in the US), tend to have a stronger appreciation of improvisation, reading the audience, and making a call in the present context.  Another way of saying this is that white people value being on time, and black people understand that the best part of the party is at the end, so being late isn't that concerning and is actually preferable.

For this anxiety prone white male, learning to relax and listen after having prepared the best I can; learning to have my sh#t together on one hand, but to be open to what comes, to be attentive to the nudging of the Holy Spirit, to laugh off failure; well, all of this has saved me.   No, let me say it again.  It has saved my life, and it has made life more worth living.  Can I get an amen?

I have watched people I grew up with succumb to depression and suicide attempts and successes.  I have witnessed and felt the pressure of being "whiteous," being proud and perfect and powerful, being so spotless and on-point that you can never have a day off.  I have watched this destroy sanity and peace of mind.  And I believe it is because it doesn't honor the diversity of the Kingdom God has designed.  It believes white and white-mindedness is best, it is a form of white-supremacy, and it is not what it means to follow Jesus.

Earlier this month, I had the honor of hearing Brittany Packnett, co-founder of Campaign Zero, "preach." It was a session on Civil Rights, but it felt like church to me and I shared that with her afterwards.  She preached on how much she loves her black skin, her hair, the way she and her family talk, the way she and her family worship, the way she and her family dance.  She is preaching against the Whiteousness that dominates little Pecola Breedlove in Toni Morrison's The Bluest Eye.   And, speaking to white people who feel "guilty" with their power and wish they didn't have to, Brittany said we must learn to love ourselves, too.  If we love ourselves again, love our blonde hair and blue-green eyes, love our heritage and our stories, then we might be able to handle others loving themselves.  We can more fully appreciate #BlackLivesMatter.  We can own that we have a wild and wonderful Creator who made thousands of species of butterflies that we recognize as beautiful and purpose-filled in the world.  Why do we have such a hard time with skin and hair tones?  What did Jesus die for other than to reconcile humanity to God, and brothers and sisters with one another?  What other than to undo the disobedience of Adam and Eve and the murderous jealousy of Cain towards Abel? To mend and re-create that which has been broken.

Oh, and one more thing.  Peanut Butter has saved my life, too.  My daughters full well know that when I'm "hangry," hand me a spoon and some organic peanut butter.  Thanks George Washington Carver for thinking that one up.  Phew!

So let's live into the design God always intended.  Let's let ourselves be loved by ourselves and people who look different than ourselves.  Let's love people who are different than us.  White folks, please click on the links throughout this post and learn, listen, and then go to the other side of town and actually get to know some new neighbors.  Let's live towards the Beloved Community by starting the party here on Earth in this lifetime.

Can I get a witness? 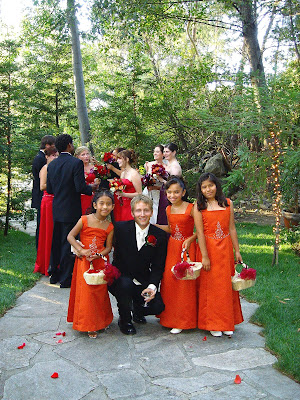 July 17, 2005.  Our flower girls Cyndy and Nicole, with another friend Ashley, were our neighbors in Koreatown whose parents fed Darcie and I far more than the enchiladas and tamales they cooked.