If one of your brothers becomes indigent and cannot support himself, help him, the same as you would a foreigner or a guest so that he can continue to live in your neighborhood. Don’t gouge him with interest charges; out of reverence for your God help your brother to continue to live with you in the neighborhood. Don’t take advantage of his plight by running up big interest charges on his loans, and don’t give him food for profit. - Leviticus 25:35-37, The Message

Give me your tired, your poor, your huddled masses yearning to breathe free.  The wretched refuse of your teeming shore.  Send these, the homeless, tempest-tost to me, I lift my lamp beside the golden door. - Emma Lazarus, engraved on our Statue of Liberty.

Last Sunday, here in Hollywood we did what Hollywood does best.  Celebrate itself!  No, I'm not going to write about #OscarsSoWhite, (at least not on this post), but I do want to draw attention to a pretty universal fact.  Whenever anyone wins an Oscar, we expect a speech.  And usually, the winner doesn't have enough time to finish it before the band plays on, or, off as the case would be here.  Sometimes, there is a political or personal platform that gets spotlighted, but most often, the reason they run out of time is because there are just too many people to thank.  From Halle Berry to Brie Larson, Denzel Washington to Leonardo DiCaprio: if they had enough time, they probably could each think of at least 1,000 people who have gotten them to their moment of glory.

And, it seems, we as a society accept this without much thought.  We know that nobody succeeds without a little help from their friends.  Or, tons of help from their friends (or movie studios and agents who also gain mightily when their actors succeed.)  Why, then, do we still seem to subscribe to the "bootstrap myth?"  If you just work hard enough, you will succeed..... (blogger Julian Abagond has a succinct and powerful post on the inherent racial discrimination at play with this persnickety Americanism.)

Here's my take on it: if someone is successful, we like them.  They inspire us.  They give us an image of who we'd like to be ourselves.  But when someone fails, a darker place inside gets activated.  A fearful place we don't like to have much contact with.  Could that be us?

And it often goes further in a very destructive way.

When we see someone living on the street, who amongst us with the blessing of stable housing hasn't, at least once, thought to themselves or even said out loud, "go get a job you lazy bum!?"  My dear friend Toni, who has lived both a six-figure lifestyle and the one-duffel-bag-on-your-shoulder-riding-bus-after-bus-just-to-sleep life, often recounts a story of chucking a large bill at a man outside a sushi restaurant, yelling at him to get his lazy ass up.  She tells that story often so that she never forgets how arrogant the haves can be towards the have-nots.   How would you manage getting a job on 1-2 hours of sleep a night, no clean clothes, no deodorant, no place to clean up?  How do you think that job interview would go?

When people are successful, we can handle the idea that they've had a great deal of help.  Remember, Hillary Swank started her career in Hollywood living homelessly out of a car.   But when people are down and out, we tend to blame it all on their choices, their laziness, their issues.  Could it be that they have just not yet found the right combination of friends to help them?  Could it be they have mental health issues that collide with successfully making friends?   Could we, especially those of us who follow Jesus, ask a different question than: how did they mess up their lives so badly?  What about: how could we surround them with love and work on creating a stronger network of ongoing support? 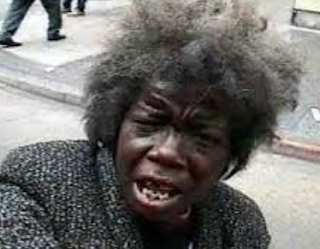 So what does this have to do with the entitlement debates?  In my opinion, everything.  Let's be honest, who is the poster child for "welfare?"  Is it me?  Or do our imaginations conjure an image like the woman pictured here.  This is not by accident, mind you.  Images like this flooded our media during the 1980's Reagan-Era War on Drugs, which, to be fair was coined by Nixon, and involved Bush the Father as well as Clinton the man.  This was the image of the crack momma, never mind that cocaine use among wealthy white folks in suburbs was far higher than our urban dark-skinned brothers and sisters.  (More on this, read Michelle Alexander's entire book, The New Jim Crow.)

With politicians constantly criticizing people who are "fleecing our health care system, making us pay for their laziness, etc," we have been trained, through repeated exposure, to imagine the image of this woman.  Now, I have no idea who she is, and what happened to her, but it looks like someone came to take a photo without her permission, and she looks pissed off.  Now her image is in stock online photos when you look up War on Drugs, Homelessness, Welfare.  Wouldn't you be angry too?  I pray that, wherever she is, someone is treating her more kindly than this photographer.  There's blood on my hands here too, as I'm using the photo....but I hope to be doing it to prove the next point, and I hope that somehow helps.  Of course, you can decide.

Barbara Ehrenreich, author of Nickel and Dimed, an exposé of the fallacy of minimum wage actually being a living wage, also authored a piece in Time magazine a while back highlighting that in 2001, 61% of the population receiving cash-assistance from welfare is white, while only 33% are black.  In 2013, that number had not changed much.  The chart on the left details who receives food stamps in this country.

The real issue with social security and welfare may be that it was designed during a time when Americans' life expectancies were much shorter.  The coffers weren't designed to support people for 30+ years after retirement.  But, instead of talking enough about that, we blame immigrants, we blame poor folks who are stuck in a hole that would literally take super-human strength to climb out of alone.  Not only are they to blame for their own situations, we blame them for hurting the whole country.  (See Make America Great Again.) But God did not design us to be as independent at the American Dream claims we can or ought to be.  God created us as interdependent creatures, and intended safeguards through the practice of Sabbath Economics, referenced in the Leviticus passage at the start of this post.

Just yesterday at the Sherman Oaks mall, I got to witness, what I believe to be, the heart of the entitlement problem.  The laptop I type this on was performing slowly, so I made a Genius Bar appointment at the Apple Store.  While I was there, not one, but two people impatiently freaked out, after waiting only about 5 minutes, and cursed at the Apple employees.  Another woman was saying to the man helping her, "so, what you're saying is that I could buy this now, then return it two weeks and get the discount, buy it again, return it again another two weeks later, until it's practically free?"  He replied, "I didn't say that."  Her, "Ah, but you didn't not say that."

I went to the food court and watched a woman open not one, not two, but four bottles of Kombucha Tea from the open topped refrigerator.  Each bottle fizzed uncontrollably and she just kept placing them on the counter, making a terrible mess.  She kept accusing the employees of shaking the bottles too much and wanted her money back, plus free lunch.  I had to interject, as my wife actually brews Kombucha at home, (you know, the conscientious resourceful hipsters that we are), so I know that it probably has nothing to do with shaking the bottles, more to do with how long they've sat there fermenting.  No matter, the woman's "righteous anger" was just as messy as the sticky fizz the employees had to clean up.  Thankfully, they did not give her that free lunch.  Can you picture how she walked away?

Then there's the parking lot of Whole Foods.  My Lord, that's a dangerous place, at the very least, to your ears.  The honking and honking at people, like myself, who are taking too long putting their children in carseats.

And don't forget the guy who got nabbed making a call on his cell phone by the bike cop hiding in the bushes.  That guy dropped his phone under his middle console and happened to also have his wallet in his lap.  So when the cop pulled up, he claimed it was just his wallet he was holding and the cop let him go.

I'm guessing, most likely, I don't actually have to type the next sentence, but I'm going to anyway.  All of the characters in the last four paragraphs were white, and many of them were in the Range Rover class of automobiles.  Oh, and the guy in the last story with the cop in his Honda CR-V?  Yes, that was me, though it was a few years ago, not yesterday.

I have family members who work in the medical fields who have story upon story of suburban women in their forties and fifties, usually white, who come into offices and ERs in disguise, demanding that their painkiller prescriptions be refilled.  Security is often involved in the scenes that fizz all over, disrupting everyone.

Middle and upper class white brothers and sisters?  Are we the actual problem with entitlement?  I don't know how to prove it at this stage in my research.  But if we're going to assign so much blame, or elect someone who's willing to blame on "our" behalf,  those single moms on General Relief, those folks who've come out of prison with records that make finding a new job next to impossible without organizations like Homeboy Industries, and those neighbors living homelessly as "the problem" with our country, then we ought to take heed of Jesus' urging to take the plank out of our own eyes first.  We just might see things a bit more clearly.  We might see that, in fact, we were designed to be in this with everyone else, altogether.