I Believe Change Will Happen

A month ago, the author Jeff Chu asked me: who are you writing Dismantling Whiteousness for?  A good question.  And while I am delighted that people of all races have been reading, commenting, and responding (please continue to do so!), I suppose the real answer is that I'm writing to good-hearted white people who are afraid of change and are unaware of their agency in perpetuating life-threatening systems of supremacy.  Like myself.  I'm writing this as much to process what this all means for me, too.  I'm exposing this in blog form because I believe we need much more transparency here, and we all have to be willing to be vulnerable.

Now, of course, extreme terrorist groups like the KKK are not my audience.  While I'd love to witness a moment of true reconciliation with that kind of hate, at this point, I believe that's in God's hands.  I'm writing to white progressives and liberals, people like myself who sometimes believe we've got it all figured out, who believe we are "woke" enough, and, thus, don't need to engage with topics like racism because that's "so last season," "so civil rights era," etc.  Statements that prove we are not as woke as we believe.  But this is the critical takeaway: I believe we want to be.  Wanting to be seen as "getting it" is certainly not the same as actually getting it, but the desire to be there reflects what may be at heart: we want a level playing field with our brothers and sisters who do not have white skin.  But this society has woefully underprepared us, all of us from all backgrounds, how to actually achieve that with mutuality and authenticity.   In fact, the very problem with systemic racism is that it is hard to spot if you're on the receiving end of most of its benefits.

This week, I started a new course at Fuller Seminary called Organizing Urban Communities for Transformation: Following the Jesus who Transforms the World.  It is being taught by Alexia Salvatierra, who self-described: I am a Lutheran Pastor (28 years ordained!) although I often call myself "Luther-costal."  I am a native second generation Angelina from a mixed immigrant background (Mexico and Russia). I have been actively engaged in community transformation for over 35 years, including community development, community organizing and advocacy -- locally, statewide, nationally and internationally.

Many things stand out from our first gathering, but I want to focus on her enthusiastic optimism.  She believes in change.  Even after 35 years of struggle, she knows change is possible.  And then she broke it down for us: sometimes you give people a fish, sometimes you teach them how to fish, sometimes you fish together with them, and sometimes you've got to tear down the f*@king wall around the pond, otherwise none of the previous steps make much difference at all (my emphasis.)  Sure, you must resist the need for immediate gratification, and you may also have to recognize that taking down a wall takes many people with a step-by-step, day-by-day sense of planning and re-planning.  But it's possible.  She has seen real change when people come together in action and fully embrace diversity of race, background, class, and ideas.  The challenge will be to foster that kind of optimism in a generation who have been Googled to think that everything must happen now, now, now.

And if we Christians don't believe change is possible, what does that say about our faith?  What on earth did Jesus die for unless to effect real change?  And why did he teach people about changing their ways and mindsets if it wasn't possible?

In one sense, Dismantling Whiteousness is attempting to engage with the mindset blockages, or walls, we have that encourage us to stay quiet, to not rock the boat, to not want to speak because we are afraid of being called "racist" or "naive" or "communist" or (just pick your fear-mongering insult-du-jour.)  We cannot effect change in a vacuum, and we cannot engage with people telepathically.  We must communicate, and we must talk regularly.  In blogs, in person, in how we spend our time and money, in how we vote, in how we listen and make friends.

I have also seen very small glimpses of real change.  In my work these past 8 years as the director of DOOR Hollywood, we framed service and volunteering as primarily a place of meeting in the margins.  Not so much about helping or mission, in the traditional American mission-trip sense, but really about listening, observing, reflecting, and being vulnerable together.   We asked questions that  the roughly 2,000 mostly white-skinned young participants and their leaders had "never heard before" and certainly had never heard in the context of a mission trip.  Questions like this:

"Who do you think Jesus might ask you to imagine are modern day Samaritans in your context?"

"Why are most of the people on Skid Row African-American?"

"Could it be that Jesus encourages us to meet him in the marginalized not just to feel good about ourselves, but maybe because prisoners, neighbors living homelessly and without good nutrition, poor black, Latino, and Asian folks, poor white folks living in encampments, and foster kids might have something to teach us about the Kingdom of God?  Could it be that their perspective might actually be a clearer source of reality than anything you may be learning in a classroom?"

I am not naive to think that simply asking the right question solves the problem.  But I do know that it can crack open a new line of thinking, and while all of the conversations were not earth-move-under-your-feet moments of revelation, I will share a handful of feedback statements we've gotten already in 2016.  Some are anonymous, some said it was okay to use their names.


Asking an actual African-American tough questions: questions I would never have had the courage or opportunity to ask, I got to ask at DOOR and got answers to them.

Is it okay for me, a white person, to say that racism affects me? Obviously, no one has been racist about me, but they have been racist to people I care about and that hurts me.   (Absolutely. God created us as interdependent brothers and sisters. When my sister is hurt, it hurts me. This is an important question.  It's a first step, empathy, towards reconciliation.)

It means so much to me that in just one long weekend, I learned more about other races than I had in my entire life. I have learned that change is never going to be possible if we don't acknowledge the differences between people. If we can acknowledge these, we can accept them and find healing. All I was left wanting to know is how people like Toni and Diane kept their faith through all the hardships they faced. - Karley

I will remember meeting new people and hearing primary source stories, and I feel I have a new way of respecting different race's cultures.

I liked the service parts during the day helping others, and I feel I know why many African-Americans are afraid of the police. - Palmer

Thank you for raising awareness, breaking barriers, mending broken hearts and communities. We know that there is still a long way to get to a better world, but it starts with people like DOOR to change the world. I will also remember Marvin, he was so wise.  I really am going to take with me his zeal on becoming educated about issues like homelessness and racism, and asking the challenging questions and taking them back to our classrooms to help educate others. - Nkechinyere

Marvin's personal story about his concerns for his sons as they are out there in the world gave me a perspective that I had not given much thought to. - Lori

A man asked me where I was from, as in heritage, and I have never been asked that before. - Anglo Discover Participant

I learned to pay much closer attention to the "roots" of problems; to look with an analytical & critical eye at the systems in place and challenge the status quo. I already did that to some extent - but this trip gave me firsthand experience and more reasons to do so.  Also, I will not be as afraid to ask others questions and participate in uncomfortable conversations.  Progress begins with a single step. - Giorgy

I found talking after dinner so meaningful because everyone was so vulnerable and willing to listen. We learned as much as we could about race and ministry in the days we had, and I hope we can use the information to better ourselves and this country. - Lily

And that is the lesson to be learned, sitting at a table together and sharing isn't about fixing people or changing people; it's about listening to people and respecting people.  It's about admitting that "they" are not the ones causing all of the problems and that I am just as capable of being self-centered, stubborn, and difficult to love.  It's about finding a starting place to struggle together as we attempt to reconcile our different opinions and beliefs over issues of theology, race, politics, class and gender.  It's about literally letting food and conversation create community and lift up the many things we all have in common. - Tom

Yes, these are merely the starting points.  The questions now: what's next, and what's next, and then again, and what follows that?  There is real danger in just exposing people for a minute and then expecting that to set things right.  But: it is an important step.  And these recent responses (and we've got years of similar statements in the file cabinets) convince me that this is important and hope-filled work.


We, myself included, have to work through prides and guilt-complexes and hypocrisies and fears, but it is possible.  Turn off all media for a time, liberal or conservative.  Both often stoke the fear that being called a "racist" would be the worst thing imaginable.  All that does is make us afraid to try to speak and understand.  So what if we we make a mistake, I've been called racist many times, you might even be wanting to call me one now.  So, to be fair, turn off this form of media too.  Go talk to some actual people who look different than you. 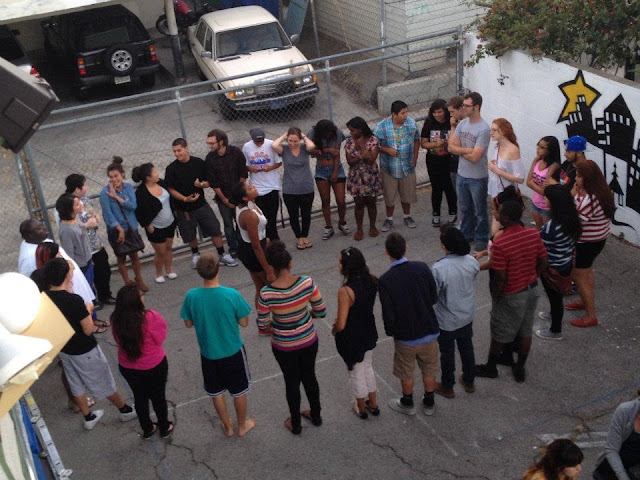 Posted by Matthew John Schmitt at 9:58 AM