Grieving the Death of Systemic White Supremacy in 5 Stages

"It is this very act - the careful and patient observation of systemic racial components of our society - that the majority of white America has refused to engage in.  Choosing to trust their own intuitions and personal, subjective assessments - which are socialized in dominant culture - many white Americans focus on an individual [race] card rather than attempt to make sense of how that card fits into the larger deck." - Drew G.I. Hart, from Trouble I've Seen, Changing the Way the Church Views Racism

Last night, as part of our regular DOOR Hollywood activity of breaking bread and talking about systemic racism and classism, our longtime friend, pastor, and educator Manny Flores spoke about the danger of not giving people ample time to process, reminding me how I've had 20+ years to wake up to the powers and principality of white supremacy in our country, what I've been calling Whiteousness.  Again, not against people, but certainly against mindsets of violence and indifference that benefit, mostly, me.

My wife, Darcie, commented this morning about how important that is, that people are given time to process, reconsider, and move towards repentance and new hope.  But: what happens more often is this: Donald Sterling or Paula Deen or Donald Trump or some other white person says something outright hateful, and we say, "that, that is racism."  The trouble is, that focuses on an individual incident and covers up the system that we all live in, from which only some truly benefit.  But: white people who aren't prone to overtly hateful statements feel trapped, afraid to actually say anything for fear that if they mess up, they will be branded with a big scarlet R on their forehead for the rest of life.  It's what Toni White and Marvin Wadlow Jr. have been saying all along, too, that we have to allow for a time of process, and that the end goal should never be for "pink people" to hate themselves, but for a new place of awareness, compassion, love, and listening.  A place of God-centered, right relationships.  Justice.

Darcie said that we need to imagine Dismantling Whiteousness along the typical stages of grieving.  Yes, yes we do.  So, Anglo sisters and brothers, let's imagine this process:

What has died?  The absolute certainty that white lives matter more than others.  The American Dream looking like Leave it to Beaver or Friends or The Brady Bunch or..  It's the death of the 1970s image of Jesus looking like a band member of Lynyrd Skynyrd.  The idea that whiteness, or white ways of life, is "normal" American life.  The good old days, which weren't good for everyone anyway.   Let it die.  It's been a distracting mistruth for quite some time.   Listen again to Jesus about dying to oneself, from the Message paraphrase from Luke 9:  Don't run from suffering; embrace it.  Follow me and I'll show you how.  Self-help is no help at all.  Self-sacrifice is the way, my way, to finding yourself, your true self.  What good would it do to get everything you want and lose you, the real you?

In this phase, a white person denies that racism exists.  We may say, but look, we elected a black President.  We may say Justice is Blind.  We may say, I don't see color, I'm colorblind.   We may say, black people have all the same rights as everyone else now.  We may say that Asians are the perfect example of how minorities should assimilate into US Culture.  We don't want to talk about this, because we don't see the problem, but I'm guessing most of us internally feel the truth that the problem exists.   So it's really about White Fragility, that it's too hard to face, to talk about, and we are scared about what it will mean if we actually acknowledge it.  Much like losing a loved one, we are afraid to face the new reality of life without them, so everyone knows that they shouldn't engage us in direct conversation yet.

Phase 2: Anger and Asserting Whiteousness
In this phase, we get angry when people want to talk about the death/dying.  Stop playing the race card, we might shout.  This is where we imagine the myth of "reverse racism," that the true victims in the racialized society are white people.  Look at affirmative action, look at intentional measure towards diversifying companies.  This is ruining me, so stop complaining, we might yell.  We might say, "but I never owned slaves, I never used the N-word!"  This is where we say, but I'm a good white person, why is this happening to me?  White people aren't the problem, it's all the people who want to keep talking about race, they are the ones who are fueling the fires of hatred.  If they would just shut up....

Phase 3: Bargaining and "But look, I have a good Latino friend...."
In this phase, we pick up the thread of "but I'm a good white person," I have a black friend, a Latino classmate who I like.  This is where we tokenize and try to rationalize our current, detached lives as being part of the solution instead of part of the problem.  We fail to realize that the friends we make that look different than us are often people we feel we can agree with.  Look, this black person didn't vote for Obama, because...or my friend is a Latino criminal prosecutor and she is all for tougher sentences on petty drug crimes too.  We believe the "nice black neighbor" we have is an exception to the rule, and if only all the others could act like him.  In the phase, we sometimes step into believing we have the answers to save everyone, and the White Savior Complex sets in, which quickly moves us into:

Phase 4: Depression and White Guilt
This is the hardest phase for liberal, progressive, and moderate white people.  This is where most of us are stuck.  We see the problems, and we are overwhelmed with the crushing realities of the system, both because we want to fix it, but we are trying to fix it from the perspective of Whiteousness, that white people are the best solutions to every social ill, though we strongly sense that we are also the root of every social ill.  We have difficulty recognizing how we are hanging onto the comfort of being white, hanging onto the inherent privileges that it brings.  We succumb to a sort of numb paralysis, either too embarrassed or too ashamed, and it keeps us from engaging any further.  Sometimes, we circle back to a new form of denial, and decide to focus on another issue within society.  This one is just too much for us and I want to go to the spa in the nice part of town.  I should be allowed to just relax, right?  And the cycle can begin again, if we find ourselves in a new context where race is discussed, because a coworker is angry about, say, Ferguson or people who are down on Donald Trump.  But if we don't, we might just go back into our white privilege and close our eyes and pretend we've figured it all out (but it's a new form of denial).

Phase 5: Acceptance and Dismantling White Supremacy
This is the phase of awakening.  We see a path forward, but it definitely must be without the past life. Someone has died and we have decided to move on for the health of all of us still living.  We can see that some of that life was okay, but other parts were deeply problematic.  We no longer wish for the good ole' days, as we see the inherent fallacy of that perspective.  Where we were scared of what's to come, we have started to sense direction.  And it is not about us, alone, because we have listened and listened and listened and are eager to keep listening.  We have stopped doubting the narratives of minorities and started to trust that, not only are they accurate and critical stories, but they are helpful in healing, both in our own healing, and in a collective healing.  It's like the moment in The Matrix where we can finally see how stacked the deck, or the green programming code cascading all around us, has been in our favor.  We can also recognize how it has enslaved us as well.  We see Jesus' words about the last shall be first and the first shall be last with new eyes, and we understand why he spent so much time with folks whom society was purposefully marginalizing.    We step in, scared but open, trusting and questioning and listening, even the tough questions and the hard-to-hear answers, even if we mess up and are called harsh names along the way.  We are finally open to receiving the help and critique and wisdom that has been here all along, waiting for us to come out of our hole. 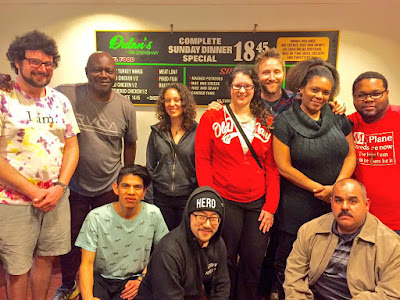 Let's listen to our black, brown, Asian, and Native brothers and sisters.  Let's hear about the "other Americas" experienced by refugees, prisoners, transgendered siblings, Muslims, trafficked young people, undocumented neighbors, those living on handouts on the sidewalks.  We have much to learn, and there is abundant life ahead if we learn to let go.  Jesus staked his entire life on it.

For the last word today, take a listen to this awesome brother, jason chu: