A Swamp of Words

Words matter.  Always have, always will (or, I shudder to think, "always should.")  It's one of the things that make us distinctly human, our ability to represent thoughts, ideas, actions, people, plans, schemes, and hopes through symbolic means.  As a person with a degree in Literature, I celebrate words.

As a follower of Jesus, I also celebrate metaphor (well, to be fair, as a student of literature I've long celebrated metaphor, so when I really started reading the Bible, I was thrilled to find Jesus teaching through parables, similes, and metaphors).  Jesus used mustard seeds and fields, bread and wine, sculptors and sheep, rocks and waters.  Metaphors engage that space in our consciousness that requires making relationships between things to deepen our understanding of a topic.  I might even say that, when allowed, metaphors can also develop our empathy, because in order to understand the lesson of the metaphor, we must try to see something from a different perspective.  Our muscle to apply that to people outside of our immediate bubbles is then exercised. 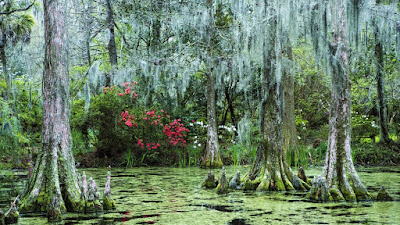 There's a popular metaphor floating around these days.  You've heard it: Drain The Swamp.  Before I go further, the literature lover in me just has to critique this metaphor.  If you were to actually drain a swamp, you would only lose the water.  Everything that makes a swamp, well, a swamp, would still be there.  The cypress trees, Spanish moss, alligators, snakes, lily pads, would either clog the drain, or just be standing on dry ground, dehydrated.  (Talk about climate change.....)  "Clear the Swamp" might make a little more sense, but that's not what we're working with.

So then the question is: what does the swamp refer to?  We've heard that it means elite politicians and longstanding bureaucrats.   Does it?  My first grade daughter is being taught to support her answers by finding evidence in the text, the story, or the calculations.  It's not enough to be "right," to have the actual correct answer, you must be able to look back in the material in front of you and point to where you found the information.  In this, there is no room for alternative facts.  It's either there, or it isn't.

Now, my Table Setters co-founding partner and might I disagree here, and that's okay, because I feel compelled to step into this swamp and look for the evidence of what is right in front of us this past week.  I believe it represents a core tenet of the problem of Whiteousness.  We have a new administration that is being comprised of some of the most socially and financially elite folks in our country.  In turn, they are also the least academically educated administration in quite some time.  Now, I do understand the frustration with academic elites, people who always think they are smarter than everyone else.  We, with college degrees, must always tread carefully here.  However, the few browner skinned members in the new cabinet are the most educated, while many of the pink-skinned members have only bachelor's degrees.  In other words, there is financial privilege at play here, and it appears that the privilege is long-standing for many.  The non-white folks have to get the highest degree of education possible to sit at the table with white folks who've not had to work nearly as hard.  So: will we be replacing the swamp of political elites with racial and socio-economic elitism?  I don't think that's a good swap.  And that is an understatement.

We also have orders that, when looking at it, does not seem to go after anything elite whatsoever.  Take a look at this swamp of words gathered this past week through a collection of online news sources and social media.  I've added my interpretation between the lines in red, in my attempt to try and understand exactly what, or who, constitutes this so-called "swamp."

I'm really confused.  If the swamp actually referred to career politicians, why then are there no immediate orders to limit their power?  Why do we see, instead, so many orders to diminish services closely connected with our citizenry?  Or, maybe more accurately, certain sectors of our citizenry?

This so-called swamp is getting, well, muckier.  What will the draining look like?  Will we all get flushed in some way or another?  I believe the time to pay attention is great and critical, but we will have to seek information outside of the news, outside of social media, and actually get to know a Syrian neighbor before they are deported.   Who is the real threat, who are the real dangers?  How will anyone be able to tell?  My list above is just a list until I get to know some of these so-called problem children.

I attended a planning meeting at the Detroit Historical Society a few days ago as 2017 marks the 50th Anniversary of the events of 1967.  During the meeting, one person said something quite profound: "I've found that I can tell a lot about someone by how they describe 1967:  Was it a riot?  Was it an uprising?  Was it a rebellion?  Was it a revolution?"

What happens to a dream deferred?
Does it dry upLike a raisin in the sun?
Or fester like a sore--And then run?
Does it stink like rotten meat?Or crust and sugar over--like a syrupy sweet?
Maybe it just sagslike a heavy load.
Or does it explode? - Langston Hughes

You can see, if you call it a riot, you frame all those involved as the problem.  If you call it an uprising or a rebellion, you imagine the "powers-that-be" as the problem.  There is a mural a few blocks from my house that refers to 1967 as "Detroit's 1776."  Is it that far of a stretch?  We can learn about colonial rebels who massively destroyed British property and cargo by dumping tons of tea into the Boston waters.  People died.  But we frame it as just and necessary, because it led to the formation of the United States of America.  I've heard some talk already of how the big auto companies fled Detroit to set up shop in the suburbs and overseas, and this decimated the incomes of many of our neighbors.  Meanwhile, car insurance rates were soaringly high and a public transit system was diminished to relative uselessness.  How frustrated and angry must our neighbors, now in their 70s and 80s, have been to live with such instability and entrapment?  I hope to learn more about this as I continue to get involved this year, by hearing from first-hand accounts of people who actually lived through being defined as citizens, (well, actually the word-choices are often much more damning) in the "worst city in America." Take a minute to watch the video below:

Pay attention friends.  And I'm including people that I disagree with in that mix.  I believe we are all prone to being divided and conquered, and if we don't find our similarities and our common hopes and dreams across race, class, faith, and political ideology, we will all go down Titanic-style.  We are being divided, that is for certain, so I have to ask, are we being conquered?


But God’s not finished. He’s waiting around to be gracious to you.
He’s gathering strength to show mercy to you.
God takes the time to do everything right—everything.
Those who wait around for him are the lucky ones.

Oh yes, people of Zion, citizens of Jerusalem, your time of tears is over. Cry for help and you’ll find it’s grace and more grace. The moment he hears, he’ll answer. Just as the Master kept you alive during the hard times, he’ll keep your teacher alive and present among you. Your teacher will be right there, local and on the job, urging you on whenever you wander left or right: “This is the right road. Walk down this road.” - Isaiah 30:18-21 (MSG)

May it be so.  Let's roll up our sleeves and get to know one another.  See you at the Table.

Posted by Matthew John Schmitt at 9:41 AM