What is it that makes a few city blocks feel like a neighborhood? Of course, the schools, churches and businesses matter. But underneath those infrastructures, within those buildings, living and working and laughing and arguing, are the people. People who have gifts and needs and hopes and fears and dreams alongside other people with all of those things going on as well. People who have stories to share.

I’ve always seen storytelling as the most distinct element of being a person. When you think about it, it’s kind of a defining aspect of humanity. Other creatures communicate, and certainly some exhibit shades of empathy, but not in the unique way we do as people.

From the intersections of Van Dyke and Mack, the overlapping of the Pingree Park, Islandview, and Village neighborhoods in Detroit’s 48214, Edythe Ford shared an idea with me. “We need a community newspaper. Not just an informational newsletter, but a new newspaper that’s all about this community and our many, many voices.” 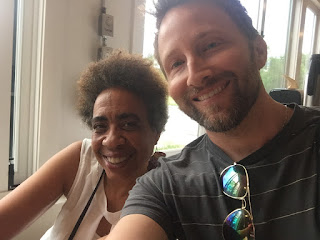 Great. How do you create a newspaper? I had no idea.  Especially one that would be more about collaborative storytelling than investigative journalism.  Maybe it should start with working on becoming a good neighbor?

I grew up at the intersection of 13 Mile and Southfield. I was blessed to have parents who did not heed some of our neighbor’s dire “concerns” back in the 80s and 90s ("how can you take your kids to Detroit, you’re just going to get them shot!” More like threats than warnings…..)

I’d often tell my suburban friends about my love for Xochimilco’s back in the day, and they’d usually just scratch their heads. Even so, my knowledge of the city was certainly limited to Southwest, the old Tiger Stadium, some parts of Midtown, and Trapper’s Alley. Before moving to this Eastside neighborhood two years ago, I’d never seen it. The closest I came was Great Aunt Dorothy’s funeral at Mt. Elliott Cemetery, but that’s a far cry from the vibrancy of Pingree Park.

As part of my fellowship with Challenge Detroit, we were asked to partner with a local non-profit for our final project. Edythe’s idea was compelling, so we met up and got to work. Early in the research, I met with Adam Selzer at Civilla, as they had printed a really attractive paper. “Anyone can make a newspaper, there's really no magic to that. But asking and answering 'who is our audience and what do they care about,’ is how to build a readership.” With so many different people in the 48214, this proves to be no easy task. Not only that, some might say printed media is a dying art. But then again, vinyl records are back in action, so maybe what goes around truly comes around?

Years ago, when my family was driving along Mt. Elliott to bury Aunt Dorothy, one extended family member kept making disparaging comments about Detroiters. “See, this is why you shouldn’t give nice things to black people. Look at how they’ve ruined these beautiful old homes.” The teenager version of me was angry with him, but I didn’t have the courage to fight back. What I wanted to do instead, even then, was get out of the car and go meet the families living in those homes and hear their stories.

I’m certain I would’ve heard something similar to what my current neighbors are teaching me: they’ve applied for loans to fix the caving-in roof but the bank tells them the repairs are more expensive than the house is worth. Once so many auto industry jobs left, steady income was much harder to come by. So a vastly disproportionate amount of wealth was circulating out in the suburbs, the place where I grew up, where we were able to fix our roof when the time came without too much trouble.

With that memory, I decided to start my explorations, or neighboring, along Mack Avenue. Edythe had already started polling residents about their overall interest in a paper, what types of content they might read, and what issues mattered to them. So I focused on businesses, wanting to first reach out to resilient owners who’ve been here for years, even decades. Sure, there are exciting new storefronts popping up in The Villages and along Jefferson, and we certainly want to celebrate and make space for that as well, but first and foremost, start with the people who’ve been holding this part of Detroit together all these years.

I met Joe at Bewick Market, Ruby at Jay’s Flower Shop, got to sit down and really chat with Darius at EJ’s Social Club. Eric Hood Jr. shared a bit about the story of Hood’s Tires, and Eric Hood Sr. began to fill me in about the interconnected ecosystem of business owners along Mack. Louis Nafso, owner of Motor City Market Place at the Eastern edge of our zip code, generously shared his perspectives on the need for more focus on residency around his block. 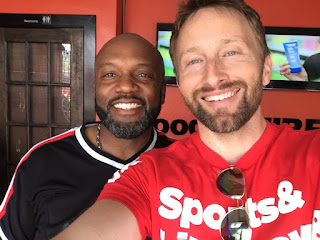 And these are just a few of the stories I got to hear on two summer afternoons. Imagine what else we might all learn together.

Our hope is to create a newspaper filled with compelling narratives from our diverse Detroit community. We certainly want to focus on the positive stories, but we also want to not shy away from the friction. Alongside being a writer, I am also co-founder of The Table Setters, a small non-profit dedicated to creating vulnerable and brave intersections between groups of people that, because of how zoning and residential laws of the past have sequestered us into homogenous groupings, never cross paths. I’ve learned that authentic diversity is actually really, really hard. Tolerance is easier, but we all know tolerance goes out the window when conflict hits. That script is well-worn. Like when an accident on your street brings everyone out, and then because everyone is out, old wounds resurface and fights break out and suddenly you have three options: take a side, try to be a peacemaker, or remain indoors and not get involved.

In that spirit, The Neighborhopes to make space to explore tough questions: 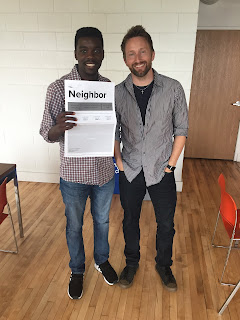 As Detroit is changing, is it for all of us, the newcomers and the long-term residents? And if it’s unbalanced, how can we redirect in mutually beneficial ways?

Knowing that the suburbs were intentionally designed with legalized segregation, what will it take to make a more integrated city? Could we do it here? Places like The Commons give me glimpses of hope.

How do we celebrate the successes of schools, churches, and businesses and help to share the wealth in our community?

How might we hold each other accountable to actively listening to each others’ perspectives? And, as a European American who gets to be called “white,” how can I do a better job of trusting the ideas of my neighbors with more melanin and many more drops of sweat, tears, and even blood, in this place called Detroit?

How do we work together to find a good balance between all of our needs to feel safe, both physically and socially, with our hopes to not diminish the full humanity of people who are different from ourselves on the grounds of race, class, gender, age, cultural, economic backgrounds?

How do we become better and better neighbors to one another?

I pray this paper may become a bridge building space. I look forward to hearing and reading your stories soon, to learning how to be the best neighbor I can be.