"I sat in a meeting today where we talked about the need for faith communities to come together to plan for sanctuary spaces, and how we must create a firewall to protect the vulnerable.  A friend who is a rabbi was fighting back tears as he spoke.  The pain is real.  The fear is real. The threat is real.  And so, I ask my evangelical friends who voted for Trump (a man who's campaign promised registry and removals), what will you do when they come for your neighbor?" - Lorynne Young

My @TheTableSetters co-founding partner and I traveled back to Marion, IL for the majority of this week, a place that is quickly becoming our home away from home.  Marion is two hours from St. Louis in a rural area known as Little Egypt.  This region prides itself on being a great provider to the country as the ground is fertile and the river-saturated soil is rich.  And for us, the hospitality of Dan and Susie Selock is Biblical and profound. 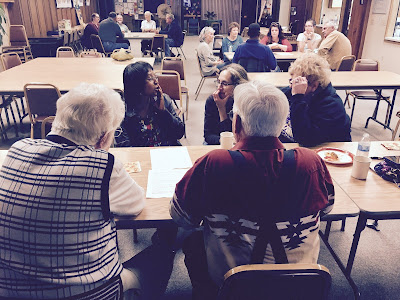 As we traveled from church to church, spoke on the floor of the Presbytery of Southeastern Illinois, and visited restaurants, we heard a range of thoughts and opinions from the heart of our country.  We heard fears and celebrations.  Frankly, I heard many similar conversations to what I've been having in the metropolitan Detroit area, from the Lyft riders in my car.

This morning, Marvin and I went to the gym.  I overheard two older men working out next to me (this is becoming a theme: see "Playing the Dangerous White Card").  They were talking about the Electoral College, and I piped in to say that there is a large petition calling for the dismantling of the college.  Jim said to me, "well, you can wipe your ass with that petition, cause then it'll just be LA and New York who'll decide."  As of typing this, nearly 4,500,000 people have signed it, the largest in Change.org's history of online petitions.

And then we got into a calm dialogue.  I don't know much about the electoral college, I admitted, but thought perhaps the 50% of the country who didn't even vote in the election of Clinton vs. Trump may already feel like their vote doesn't matter because of the EC.  Maybe they would actually start voting?  He found that interesting and possible, said he hadn't considered that.

He told me that he has always voted Republican, and the conversation I interrupted was with his friend who, as usual, voted Democratic this time around.  These two men have lived in Marion their entire lives as friends.  They have always respectfully disagreed on politics, but they love to listen and consider with one another.  So we continued.

Jim told me his friend's wife also usually voted Republican, but she couldn't because of Trump's "locker room talk."  She couldn't believe a grown man could talk like that.  Jim said, "well, you should come to one of the BBQs I attend each week.  Men always talk like that about their exploits.  One guy said on Sunday that his penis is so big it's ribbed like a rack of lamb."  (Sorry readers, I can never un-hear that, so I'm throwing my pain to the community.  At least you only have to read it!)

I said, "does that make it right?"

He said, "I'm not saying it's right or wrong, but it happens all the time."

He told me that he believes its our civic responsibility to vote, and I sparred back to say that "voting" is the bare minimum of our civic responsibility.  He agreed, and said the real civic duty is to serve.  Now I was surprised to learn that he meant more than military service: Jim considered joining the Peace Corps at one point in his life.  I expressed that I had been part of AmeriCorps in Teach For America, and Jim actually thanked me for my service.  I almost felt a bit of a salute, not that I was fishing for it in anyway, but there was legitimate respect from him.

He said that he doesn't believe Trump actually would do any of the things he talks about.  "He's a rich, rich man, why would he need to do any of that?"  I said, "well, rich people do all kinds of things because they know they can get away with them!"  Jim said, "well, you do have a point.  That is true, power does corrupt, it does corrupt.  Guess we'll have to wait to find out."

And then Marvin walked up to say we needed to get ready to leave for our morning meeting.  I introduced him to Jim, said that Marvin lives in LA and I live in Detroit, and Jim said, "wait, you (pointing to brown-skinned Marvin) should be the one from Detroit!"  Awkward laughter, and we actually did have to move on. 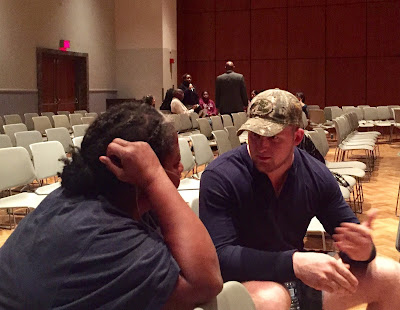 So here's the reason I share this: I am glad I engaged.  (I better be, as a Table Setter!)  I was struck with the idea of his friendship with his Democratic friend.  I was intrigued by his respect for a variety of ways one can "serve" the country.  I was angry with his willingness to pass over Trump's behaviors, and his BBQ buddies too for that matter.  But: had we had more time, I believe there is more to uncover and more to learn about one another.  I will probably still disagree with him, he will probably still disagree with me, but the effort to understand trains our empathetic muscles.

And it stirs me to press forward.  As a follower of Jesus, it occurred to me this week that Christianity was always meant to become increasingly and broadly more and more diverse.  Christianity was a revolution, in a major way, because it embraced God's diverse design, inviting all into the family: Romans 14 lays out that we should expect to sit at tables with people of a variety of cultures.  Following Jesus was always supposed to be diverse in its welcome and its reception of a variety of customs and cultures: Pagans and Gentiles would be added to the family alongside the Jews, and from there followed clear instructions to reach out to Asians to Africans to Arabs to Europeans to....you, to me.  Isn't it tragic, then, that our churches are so segregated?  Isn't it tragic, then, that Jim, who I gathered is also a Christian, assumes that Marvin might only live in a place known for "black-people-ness?"  Jim clearly does not know many people with brown skin, and his assumption also underscores the deep problems of redlining, zip codes, and segregated schooling.

Jesus went back to Nazareth after being tempted by Satan.  His hometown.  And he made it clear that God's Kingdom was meant for the entire world, not solely for one people group. 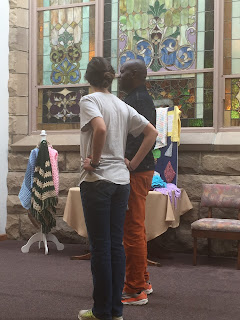 "'And there were many lepers in Israel at the time of the prophet Elisha but the only one cleansed was Naaman the Syrian.'  That set everyone in the meeting place seething with anger.  They threw [Jesus] out, banishing him from the village, then took him to a mountain cliff at the edge of the village to throw him to his doom, but he gave them the slip and was on his way."  - Luke 4, MSG

Before he was actually crucified, people wanted to kill Jesus for suggesting that God's favor might fall upon someone other than themselves.  Diversity.  It's not just for us.  It's for the whole world.

And Jim, and all y'all Evangelicals who keep dismissing Trump's abhorrent statements: I must say I'm tired of hearing that Trump's worst problem is his mouth. What about his tweeting and grabbing fingers? In my math: Problematic Tongue + Problematic Hands = Problematic Mind. Trouble ahead.

Evangelicals, of which I count myself in that number: again I ask, what will we do when they come for our neighbors?  For our Muslim neighbors in Dearborn?  For our Latino parents in Hollywood and Pacoima and Compton?  For our young brown-skinned millennials who will be caught up in ever-increasing "stop-and-frisk" nets?

You see, my non-Christian friends now believe that American Evangelical Christianity, most definitely from our white churches, has crossed the final line.  If our heart is to win people over to following Jesus, we are doing the very opposite right now with the collective account of our witness to the 75% of the country who did not vote for a man who has promised registries and removals in a similar spirit to King Herod.

Our witness to the world is dim.

Now, more than ever, I am convinced that our work with The Table Setters is absolutely critical.  I will quote Marvin Wadlow Jr., something I rarely do because I have to listen to him so much (ha!), but he says that if we don't sit at table across differences on a regular basis immediately, "Ferguson is going to look like Disneyland."

We have policy promises for registries and profiling and immediate deportations and criminal charges against peaceful protestors.  Marvin's words are feeling more and more prophetic.

Diversity Workshops: We offer faith-rooted launch events for diversity initiatives that highlight the critical need and possibilities of culturally integrated lives.  These can be customized in a variety of ways, including for religious or secular audiences. 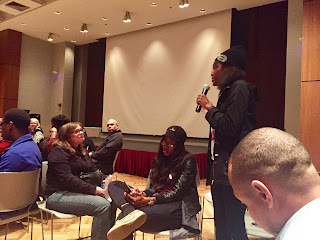 Academic Presentations: Either in person or via teleconference, we can visit your school or university with customized lessons and challenges. We are also able to offer Continuing Education Units (CEU).

Diversity Accountability Plans: Through in-person visits, video conference calls, and other correspondence, we can advise and provide counsel for initiatives in your community, church, school or business. 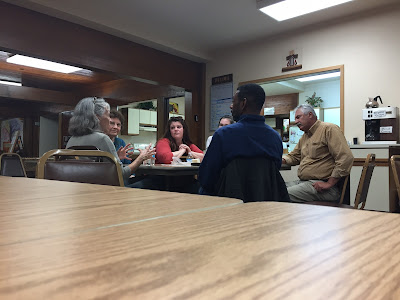 And here's what we need help with, right now:

2. Financial Support to facilitate our full launch into non-profit status; to carve space for Marvin and I to write our partnered books; to assist lower-income churches who may not be able to afford the costs of bringing us to visit.

3. Help spreading the word to schedule table settings at your churches, schools, businesses, and at denominational conferences and events.


- Posted using BlogPress from my iPhone